The Soho Central’s location is the main selling point of the condominium. When you live in the Soho Central, you are quite literally a stone’s throw away from everything that you might need and maybe a couple of other things that you didn’t know you needed.

First, the Soho Central is highly accessible to all sorts of public transportation options. On the ground level, there are dozens of buses and jeepneys and buses that ply different routes that will take you all over the city of Mandaluyong and in the other neighboring cities. However, the best feature of the Soho Central is that it has direct access to the Metro Railway Transit III Shaw Boulevard Station. This means that you do not have to go down to the street level to get inside the train station. From the station, it will only be a quick 15-minute ride southbound going to the Makati CBD, and almost the same amount of time towards the Quezon City CBD on the northbound direction. There is also a taxi stand right in front of the condominium so you will always find a ride whatever time of day it is.

If you are looking for schools, there are actually several that are just minutes away from the Soho Central. First is the Saint Pedro Poveda College at the corner of Ortigas Avenue and EDSA, which is just a 5-minute bus ride away from the condominium. This prestigious Catholic school has been providing world-class education for years. Recently, they expanded their curriculum to accommodate college students.

Another school that you should check out is the Dela Salle University Greenhills Campus. This is one of the top universities in the country and it has produced some of the finest and upstanding graduates the country has ever seen. Most of them found very rewarding careers in the government and in the private sector. There are even more schools, both private and public, in the immediate area and in the neighboring cities. You are actually spoiled for choices.

However, the best reason for living in the Soho Central is because it is walking distance from some of the best shopping destinations in the country. For instance, just beside the condominium building is the Star Mall Shaw Boulevard. This mall has dozens of shops, restaurants, and cafes that are more than enough for your casual window shopping needs. However, if you want to go on a more heavy-duty shopping spree, you just need to go across EDSA so you can visit the Shangri-La shopping center. This mall carries all of the high-end brands that you can think of, and some that you might not even know.

The mall also has a couple of cinemas where you can catch the latest flicks. Now, if you want an even grander shopping experience, a dozen or so meters from the Shangri-La Mall is the SM Megamall, a huge monolith full of all kinds of stores, dining establishments, and many more. If you are a shopaholic, there is truly no better place to live in other than the Soho Central. 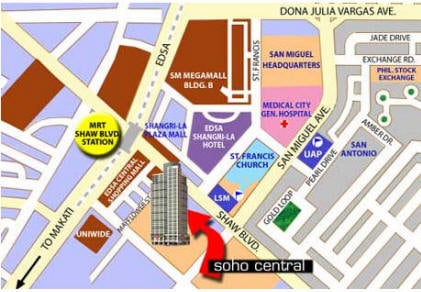