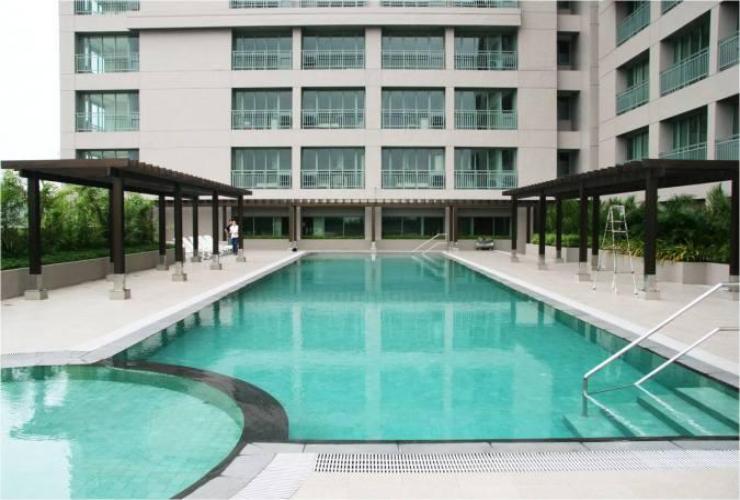 When searching for a new home, people usually put more value on residences that provide easy access to modern facilities and amenities. This is especially true for single professionals or dual income families. However, most of the time, you have to compromise between accessibility and comfort. Most of the apartments in urban areas are already quite old and dilapidated, not really conducive to raising a family. Thankfully, that is not always the case. The Soho Central Condominium is a residential high-rise in Mandaluyong that is literally within walking distance from all the amenities that a person will ever need and the building itself will make you feel like you are in a high-class hotel.

The Soho Central condominium is a project by Century Properties, one of the leading and most ambitious real estate development companies in the country. Some of the famed projects of this company include the Gramercy Residences (which is currently the tallest building in the country), and the Azure Urban Resort Residences, a high-end residential complex that features the first man-made beach in the country. Although the Soho Central Condominium is not as posh or opulent as the previous two mentioned, Century Properties doubled up on practicality and accessibility. However, that is not to say that the amenities provided by the Soho Central are to be scoffed at, but more on those details later. For now, you need to learn more about the residential units.

The Soho Central is located right at the corner of Shaw Boulevard and EDSA, which gives the condo compound unparalleled functionality. However, the Soho is not just pure function and no form. The building itself provides top-notch amenities and spacious residential units. If you are thinking of making the Soho Central your new home, you actually have a couple of choices when it comes to the unit type. There are studio-type units, one-bedroom units, and two-bedroom units.

If you live on your own, the studio-type units might fit your needs. The studio-units have a total floor space of 31 square meters, which might seem small on paper but when you see the units personally, you will find that they are quite efficiently designed. There is actually enough room for a small living area, a dining table for two, and a double-sized bed in the sleeping area. The units also have amply-sized and fully tiled and furnished bathrooms, as well as built-in kitchen counter-tops (completely tiled), cabinets, and cupboards. Furthermore, you can find provisions in the kitchen area for a refrigerator and a stove.

If you need more room, like if you live with your partner/spouse but you don’t have any children, the one-bedroom residences might be more to your liking. These units have a floor area of roughly 40 to 42 square meters each, and besides having a separate bedroom, these units also have more open floor spaces, which means you can place a much bigger living room set and your dining area will also be effectively larger.

The kitchen area in the one-bedroom units is essentially the same size as the ones found in the studio-types but it is now neatly tucked away in one corner of the residence, out of sight from the rest of the unit. The bedroom is actually quite spacious. You will have no problem whatsoever fitting a queen-sized bed in there and you will still have some room left over for a cabinet and a small desk.

If you have a small family (one or two children), you can avail of the two-bedroom units. These residences measure 81 square meters and the added space was not just used for an extra bedroom. The open floor space also got an upgrade. The two-bedroom residences have more than enough room for a much larger living area and now, you can fit a dining table for six people. These units also have a Master’s and a regular bedroom. The Master’s bedroom also has a separate T&B and it is also much more spacious than the other room. The kitchen area is also a bit larger to accommodate the increased number of occupants.

All residential units in the Soho Central condominium have balconies (the two-bedroom have two balconies, and three for corner units), a laundry/utility area, and provisions for air-conditioning units, cable TV, landline phones, and internet.

Century Properties, Inc. (CPI) has once again been true to its promises as it brings to you the Soho Central, a striking 41-story mixed-used condominium (residential and commercial) community for sale in Mandaluyong City.

This single high-rise tower is a great pleasure to live in as it is located in the heart of the city’s Greenfield District, a private and integrated urban community spread on a 15-hectare prime property and is fast becoming one of the most important central business districts in Mandaluyong City next to the Ortigas Center. Soho Central cuts through the middle of everything- Makati, San Juan, Taguig, Ortigas Center, and Quezon City, are just a ride away from your new home. This affordable condo tower at the most centralized and technically-able location in Mandaluyong City is sure to provide business-minded people the right tool to have a luxury living integrated with modern technology.

The Soho Central is centrally located along Shaw Blvd., Brgy. Highway Hills, Mandaluyong City, Metro Manila. This location is near the intersection of EDSA and Shaw Blvd. in the middle of the Greenfield District. This immaculate residence is considered the next residential destination in Mandaluyong City plus the master-planned township of Greenfield City dubbed as the “future-proof” and the upcoming technology center northeast of Metro Manila. Actually, investors will really hit “two birds with one stone” once they own a slice of the Soho Central because of having an ideal home location and a perfect enclave at the same time.

Moreover, this inspiring condo community is less than 2km from the Wack Wack Golf and Country Club, just a 15-minute ride from the Ortigas Center, and a stone-throw away from Pasig City. The site is also less than 5km away from the central business districts (CBD) of Makati and less than 8km from the Bonifacio Global City (BGC) in Taguig. The easy and quick access to your new home from any origin within Metro Manila make you more mobile and saves a lot of time and money when you have a job or business on these CBDs. Additionally, having a nice and almost perfect condo unit in the middle of Mandaluyong City need not be expensive, like the Soho Central.

The Soho Central Shaw Blvd. caters mostly to starting and growing families, newlyweds, young professionals, various end-users, and other urban dwellers that want to have a homey ambiance (with easy access to everything under the sun) while living in an urban setting. Available residential units come in Studio (30-31sqm), 1-BR (31-46sqm), and 2-BR Units (47-69sqm). Most units come semi-furnished with basic deliverables and other finishes. Unfurnished units are also available with the lowest price but also high in quality compared to other upscale vertical residences across Mandaluyong.

The Soho Central, as expected with other Century Properties’ developed communities, has some of the outstanding recreational amenities on its list. The site has an splendid outdoor swimming pool, a kiddie pool, fitness gym, function rooms, spa with steam room, sauna, Jacuzzi, residents’ lounge, conference room, laundry shop, jogging path, 24/7 security, two floors from the ground dedicated to commercial shops and boutiques, well-secured basement parking, and other well-established building features.

Century Properties Soho Central in Mandaluyong City, Philippines is a premier Condo project available for sale. If you're looking to rent or purchase Soho Central, then check here first. We have full details of Soho Central updated regularly as well as everything you need to know about the availing and booking process, broken down into stages that includes selecting a unit, choosing a payment plan and buying your dream home at the right price. For price list, free site tripping or showroom visit, personalized service, model house, unit plans, floor plans, payment terms, CHAT LIVE with an agent 24x7. Always only buy from PRC licensed Real Estate Brokers and Agents.

Why Invest In  Soho Central

The Greenfield District is tech-ready

The Greenfield District in Mandaluyong City, as the name suggests, is a pioneering development undertaken since 1998 by Greenfield Development Corporation (GDC) with a green but a high-tech environment of a mixed-use township. This way, clean living amid a modern way of life could be enjoyed by those who want to relocate on this perpetual pristine abode in the middle of a burgeoning city. This amazing CBD is currently equipped with Fiber Optic Internet Backbone which provides fiber-to-the-home or FTTH technology integrated with the district’s master plan.

As the Philippine Daily Inquirer said in its report on October 2017 about Greenfield District, “Apart from the requisite master-planning standards of integrated townships that seek to meld the various aspects of daily living, Greenfield District sets itself apart by a number of inimitable features that truly make it an integrated urban community like no other”. With this vision by GDC, your home at the Soho Central by Century Properties is not only in a good location but also in an innovative zone that continues to evolve into an advanced community.

Unlike any other upscale residential developments in Metro Manila, the Soho Central Mandaluyong City offers not only glorious living conditions but also the safest enclave. The site is built on solid ground with elevated flooring higher than the street level that prevents flooding. Additionally, the site has a massive underground drainage system that adds up to its secured environment from the built up of rainwater and other “acts of God”. Moreover, each unit is equipped with automatic fire alarm and suppression systems, fire sprinkler system, fire exit in every floor, standby generator units in case of emergencies, efficient water distribution system, Internet and Cable TV provisions, provision of telephone landline, pets are allowed, and other safety features that could enhance peace of mind even if the family is sound asleep. CPI is truly committed to keeping safe not only your physical investment but also the safety of the entire family.

Once you have purchased a unit at the Soho Central, a modern yet quaint condo community in Mandaluyong City, you can have the chance to nourish the family with its stunning features and amenities. However, if you want to have a sustainable monthly income, you can rent out your residential unit to other end-users. Mandaluyong City, specifically Soho Central’s location, is easily accessible from Makati, Taguig, Pasig, the Ortigas Center, Quezon City, and even Manila.

In this regard, the city is visited by more and more businessmen, expats, and other young professionals who also want to have a temporary shelter in the city better than a hotel where they can have enjoyable amenities any time of the day. These people are your number one market and they are ready to pay the monthly fees using your unit. For more details about this lease option at the Soho Central, please contact or have a chat with our licensed real estate agents on this website. You’re just a button away!

Not all homes could be yours by paying instant cash. At the Soho Central Mandaluyong City, you can have a great time paying your way into owning a piece of this property through easy-to-the-pocket monthly amortization so you don’t have to struggle to cope with the arduous task of gathering instant cash which you can’t do in reality. There is always a better way. You can have a slice of the Soho Central Shaw Blvd. via CPI’s In-house Financing or through Bank Financing whichever you prefer after you pay the required reservation fee and down payment. Check out again our real estate agents on duty in this website and ask them how to make a reservation and the consequent payment options. Chat now!